to whom it may be relevant I would like to mention that I prereleased a small function library
targeting some offline tasks with AccurateRip checksums and IDs on local CD rips.

Currently it is Linux-only, there is no Mac or Windows version yet.

The usecases are to recalculate AccurateRip checksums
and to provide this function set for the use in client applications.

There is no online functionality and there will not be any. Committing checksums
to AccurateRip is not planned and will not be provided.

It started as a hobby project for mere personal use but meanwhile it has
matured to a certain level therefore I consider sharing it an option. It's still alpha,
though, and not tested well enough. The release is a mere development release.
So, expect bugs and warts. It is probably wise to not (yet) rely on it's correctness.

If you like to use it in your own project, it comes with full documentation that
you can generate locally. Consult the Build-HowTo for the details.

There are also commented code examples illustrating the above mentioned use
cases.

So, in case this sounds reasonable so far, find the project here (https://codeberg.org/tristero/libarcstk/).

If you are an ArchLinux user, you may get it directly from AUR. (https://aur.archlinux.org/packages/libarcstk-git/)

Feedback is of course appreciated but my response time may vary. :-)

Have fun!
Title: Re: Library for AccurateRip Checksums and IDs
Post by: crf8472 on 2019-06-16 18:50:53
So, answering my own post, I would like to add that the project meanwhile has
evolved a bit. (I will not report about project progress on this site regularly,
but I think I could add this update.)

I released an alpha version of libarcsdec which provides some audio decoder
adapters. Thus, there is now a (hopefully) quite convenient way to use some of
the audio decoders that are available on linux (namely libflac, libwavpack and
ffmpeg) to generate the acutal samples for libarcstk.

I also threw together an example toolkit that demonstrates the genuine functions
as command line tools. (Maybe using them is easier and more fun than fiddling
around with a bare lib.)

Apart from this I fixed a lot of bugs, mostly cmake-related.

If you like, you may find all three units here (https://codeberg.org/tristero/).

During some years there was considerable interest in tools like ARFlac.pl
and the famous ARCue.pl. Maybe users of these tools would also like to try out
arcs-tools, since it addresses local recomputation of AccurateRip checksums on
lossless audio files. The calculation as well as the verification tool can read quite a
lot of (lossless) audio formats if compiled with ffmpeg support.

To illustrate what can be done with arcs-tools, I attached two screenshots of
calculating and verifying the AccurateRip checksums of a local album file. 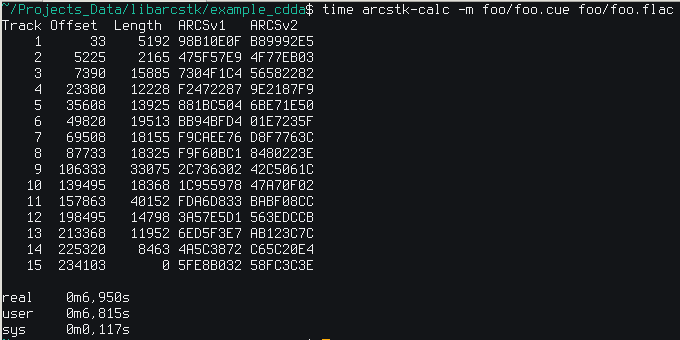