Please note that most of the software linked on this forum is likely to be safe to use. If you are unsure, feel free to ask in the relevant topics, or send a private message to an administrator or moderator. To help curb the problems of false positives, or in the event that you do find actual malware, you can contribute through the article linked here.
11
I use mkvmerge to mux a video and an audio stream.
Audio stream is not synced with video.
So, I choose on mkvtoonix a delay of 1000ms and a stretch by 1.123456 for the audio stream (this does not reencode audio stream).

VLC for PC or android play the product for a few seconds, then sound starts to crank and then stops. It seems that VLC does not stretch the audio stream. If I seek elsewere in the container sound play restores for a few seconds and again it cranks and stops.

So:
- What is the correct behavior between 3 different programs? I believe MPC.
- Must I bug report the behavior of VLC and MX Player?
12
Rip to FLAC.
Transcode from there to whatever is compatible. Traktor supports these formats.
If searching in MP3 is a problem, try CBR rather than VBR.
13
So, I've been a disciple of one of my buddies since the age of 16. Whenever he's DJing in a club, I try to be there because he plays my kind of music (Alternative, Indie, Wave etc.). I've been telling him for the last 20 years that toting around 10+ boxes with CDs isn't the way to go. Pushing 60 now he's finally had enough and would like to rip his collection.

I'll be helping him out but what codec should we rip to? Sometimes I bring along a new song on my USB drive which is encoded with LAME/VBR ~320 kbit and some decks like the Pioneer CDJ-900 apparently aren't able to seek in them properly. That won't we a problem with the Traktor deck he's also using but I'd like to have a format that works on most hardware.

^ You could try enable "Album name auto-clean" setting (in Options > Server Settings tab (blue) > Miscellaneous tab) - description of it is written at the bottom.

this definitely seemed like it would be the answer based on its description, thank you! unfortunately i couldn't get it to work even after resetting the cache and forcing updates.

as an experiment i made a new tag field called "album_clean" and manually created a tag for "Meddle" vs "Meddle (German)", went to server settings>title format and changed %BIO_ALBUM% to "$if2(%album_clean%, %album%)" which works as expected (but still doesn't clean the tag if it falls back to %album%). i'm wondering if perhaps the "utils.ReplaceIllegalChars" function is broken in v2 (32 bit)?
15
Quote from: tcmcqueen on 2022-09-25 19:06:25

are you sure you have the Winamp directory set up correctly in Shpeck's options? when i switched over to v2 i had to reconfigure it but it's working as good as ever for me on the latest beta

Well that's weird, after a pc restart it' working fine!
16
There appears to be a freezing problem with the "Album List" UI Element... when I add my library on my desktop it always freezes the entire UI when the Album list tries to update after some time. music keeps playing, at least for a little bit. and it continues to scan and read the network? but even leaving it like this for a day it does not fix itself. (I have about 300,000 tracks living on network storage, fwiw)

if I cut the element out, add in my library, let it scan, and add the element back in, all is fine. but it seems like there's possibly some race condition I am encountering from the initial add
17
OK, thanks.
18
I am asking for the favor of a JScript Panel 3 script that would take simple "now playing" information from Foobar v2 64-bit and write it to an external text file, appending lines within the file as each song is played to a specified limit (lines or file size).  The information would be the date/time played and the <artist> - <title> information from the track, from either dynamic radio station metadata or fixed files.  Nothing would need to be kept in a DB, just written into the text file appending each track while Foobar is in use.  Thanks for any help you can provide.
19
Quote from: magicgoose on 2022-09-25 12:23:25

I have a hunch that (most of) this clipping visible on the first picture, happens only because the plotting tool can't read values larger than 1.0. Because MP3 is (in theory) capable of representing peaks above 1.0. But there is a lot of software which assumes nothing can exceed 1.0 and it'll clip it.

Yes, I created the spectrograms using SoX, which operates on integers. The spectrogram of wav decoded with lame looks very similar to the first one from previous post: 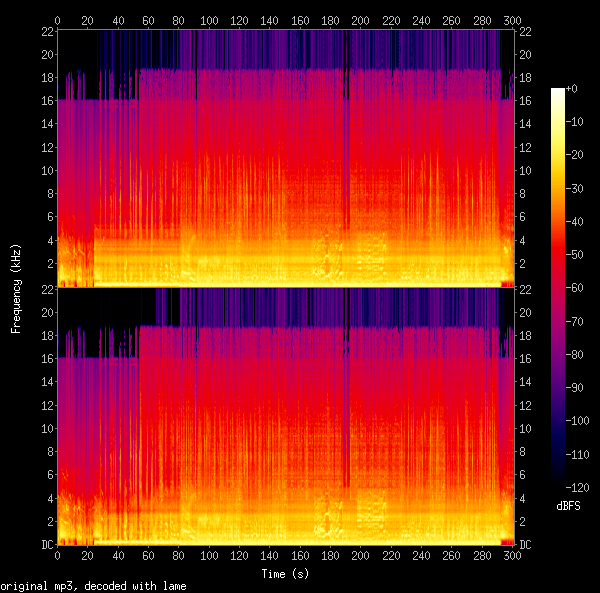 When I decode with ffmpeg, which operates on floats, and reduce the volume before saving as 16-bit wav:
Code: [Select]
then I get the spectrogram similar to the second one from previous post. 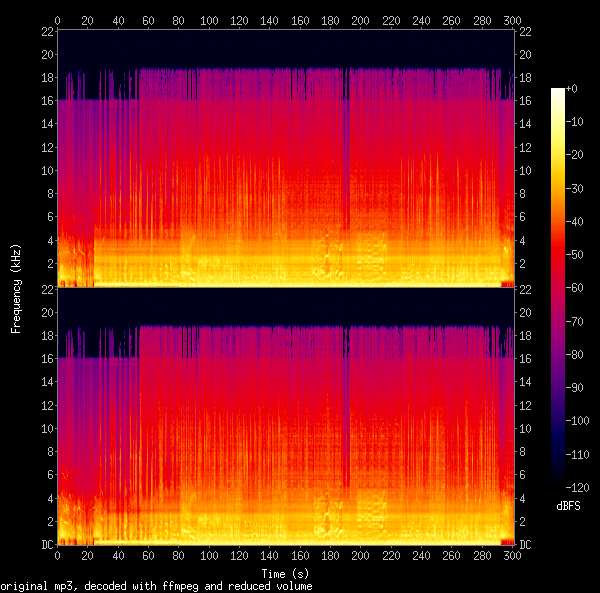 Spek seems to operate on floats, so doesn't have the problem with clipping: 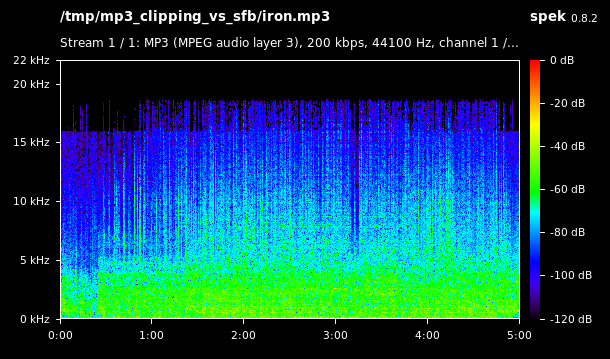 although I had to increase the window size to 16K to get a similar look like with SoX. With the default 2K the high frequencies look very sparse: 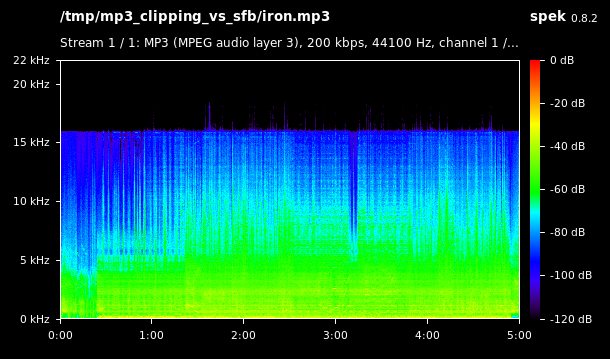 That appears to do the same as the random play button on the transport toolbar, and just picks a random point in the playlist then cancels the "random" option.  So far as I can see there is no Preferences option to make this persistent (unlike stop after current track).

Unless I am mistaken, for me it is not what you describe, it is a persistent setting.

This seems more appropriate, how do I make a button which does that (I'm using the DUI)?

Right click on a button (play or pause for example)  >  Customize Buttons…   >  on the right, look for the command  [main] > Edit > Sort > Randomize    >  Add.
It is possible to choose an icon. For example I found this one in my files (not very pretty and black, so not compatible with dark mode). If you want another one, maybe there are topics on the forum for that, otherwise there are plenty of websites. Possibly make your own icons but I'm not competent enough to advise you.